Park West Foundation - Celebrating a Life and a Cause

Article and Image courtesy of the Detroit Free Press 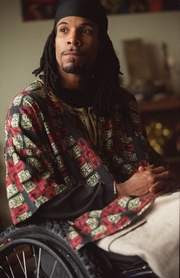 March 16, 2009
Written by Rochelle Riley
A life’s goal will matter after death
Weusi Olusola lived every day with a sense of purpose.
So it’s no surprise that his funeral will have that same sense of purpose.
On Saturday, Olusola’s family will host a peace march and life celebration to honor the 38-year-old antigun and antigang activist who died Friday of cancer. The march will begin at 11 a.m. at Martin Luther King Jr. Memorial Park at West Grand Boulevard near Rosa Parks Boulevard. The celebration will begin at 1 p.m. under tents behind the Joseph Walker Williams Center, 8431 Rosa Parks, where Olusola last played basketball standing, and where, for 20 years, he played wheelchair ball.
Olusola was paralyzed at 16 by bullet wounds from a drive-by shooting that left an 8-year-old girl dead. Ten years later, he cofounded Pioneers for Peace, an organization of shooting survivors who convinced hundreds of kids that a long life legal is better than a short life with guns.
Celebrate a life and cause
In life, Olusola rarely asked for anything. But now his family and friends are asking for him.
“We want every youth, adult, block club, organization, school, fraternity, sorority, musician, high school band, private and government agency, corporation and elected official in southeast Michigan to come to the park, grab T-shirts and march,” said Saba Gebrai, director of the Park West Foundation, which worked with Olusola on several peace efforts.
His family members are asking all of southeast Michigan to come to the march and walk for him. They are asking southeast Michigan to come to the life celebration and sign up to be a Pioneer for Peace for him, offering guidance to young people in a city that saw 344 homicides last year and 8,443 violent crimes in just the first half of 2008.
They are asking youth organizations to set up tables under the tent for him, to explain to young people how they can change their lives.
The 38-year-old activist would want people to come and say good-bye on Saturday. But he also would want them to come to work.
Contact ROCHELLE RILEY at 313-223-4473 or at rriley@freepress.com.
Gift of inspiration
The Rehabilitation Institute of Michigan today announced a donation of $2,000 to the Andrew Olusola Education Fund, created to provide a college education for Weusi Olusola’s 11-year-old son. Other donations may be sent to the Andrew Olusola Education Fund, 29469 Northwestern Highway, Southfield 48034.
“He’s just an inspiration to all of us with all the work he’s done,” Terry Ahwal, the institute’s director of development, said in announcing the donation and an employee drive for the scholarship fund. “I keep thinking of that quote, some people live until they’re 90 years old and live a short life — but he’s going to live forever.”
Donations also can be made to Olusola’s foundation. Send checks to Wheel to S.U.R.V.I.V.E., 29469 Northwestern Highway, Southfield 48034. Click Here for the Full Article