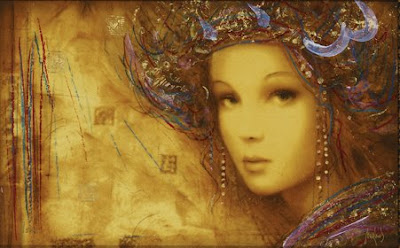 'If eyes were made for seeing
Then beauty is its own excuse for being.'
~ William Wordsworth
Dear Albert,
The VIP Tour "Class of 2008" wishes to express its appreciation and gratitude for the generous hospitality and the, perhaps, undeserved rewards we have experienced. Along the way we shared precious time with Peter Max who provided individual greetings and photo ops for each at Ringo's baby grand. Next, we were mesmerized by the flashing Hungarian eyes of Csaba Markus, then soothed by the aqueous tones of Marko Mavrovich who worked as we watched...
From the Park West faculty we gained insight via a graduate cram course in art history. So again, thank you all for demonstrating that out on the boundless sea voyage beyond all horizons in life, we stand on the solid ground of beauty held in our hearts and minds. Since great art sought us out, the Class of 2008 promises to take good and careful care of our ownership.
Sincerely,
The VIP Class of 2008" 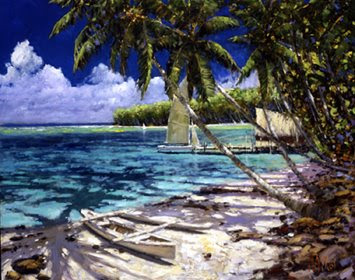 Marko Mavrovich "Solitude in the Pacific", 2005

Posted by ParkWestGal at 9:15 AM