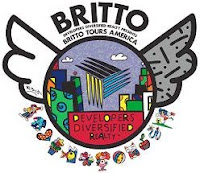 BEACHWOOD, Ohio -- With the belief that “art is too important not to share,” internationally known artist Romero Britto is bringing his museum-quality work to communities across the country. One of the premier pop artists of our time, Britto will launch the Britto Tours America exhibition, hosted by Developers Diversified Realty on June 12, 2008 in Denver, CO.

While Britto is a regular in international galleries, private art collections and museums, the Britto Tours America exhibition is the first of its kind for the artist. The traveling sculpture tour will visit 11 Developers Diversified Realty centers throughout the nation.

Each of the 11 sculptures featured will stand between 5 feet 6 inches and 13 feet 5 inches tall and will include some of Britto’s most familiar images, including Big Apple, Dancing Boy and Blue Dog. 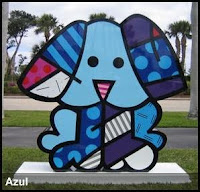 Britto’s vibrant and passionate collection is easily recognized for its bright colors and bold compositions. His sculptures and paintings are exhibited on five continents and sought by art lovers everywhere, including collectors such as California Governor Arnold Schwarzenegger, tennis star Andre Agassi, U.S. Senator Ted Kennedy and philanthropist Eileen Guggenheim. The Britto Tours America tour offers different communities and audiences a chance to experience the whimsy and joy of Britto’s artwork.

“We are thrilled to feature Romero Britto’s work at our domestic lifestyle centers,” said John S. Kokinchak, executive vice president of property management at Developers Diversified Realty. “We believe that bringing art to our communities creates an opportunity to inspire creativity, encourage art appreciation and support educational organizations. We are proud of this opportunity to foster awareness and learning of the arts.”

As a child growing up in Recife, Brazil, Romero Britto always had drive and a passion to excel. In his formative years, art was as a hobby as he pursued law and diplomatic studies. While serving in the Brazilian Army, Britto realized his dream to pursue his love of painting, and threw himself into his artwork.

In 1989, Britto brought his art across the Atlantic after accepting a friend’s invitation to visit Miami. He sold his art on the streets of Coconut Grove and got his big break when Absolut Vodka took notice of his talent and commissioned him to design a commemorative label. The project was a commercial success, and art lovers and critics began to take notice.

Following this amazing success, extraordinary opportunities and acclaim continued to come his way. He has been sought out for a wide variety of projects, including the historic 2007 partnership with the National Football League and Cirque du Soleil for Super Bowl XLI. He was recently invited to erect a 45-foot commemorative pyramid sculpture in London’s Hyde Park as part of the Tutankhamun and the Golden Age of the Pharaohs exhibition’s historic return to London after 35 years. Britto has also been commissioned for a variety of projects by notable companies such as Disney, Pepsi-Cola, Audi, Volvo and Movado.