Park West Gallery is giving away a FREE Hardcover Art Book to one of our Twitter Followers!! Our last Twitter contest was so successful, we've decided to do it again! Here's how you can join in on the fun...
Prize Details and Contest Rules
THE PRIZE:
Agam The Elysee Salon 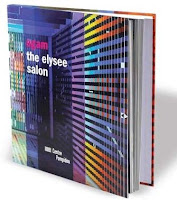 In 1968, Yaacov Agam, world famous pioneer of the Kinetic Art movement, designed an antechamber to mark the entrance to the private apartments in the East Wing of the Elysee Palace in Paris. His chamber now stands as an integral and permanent part of the Centre Pompidou. The Elysee Salon, a glossy hardcover book published by editions du Centre Pompidou, contains extracts, interviews and gorgeous color plates of the entire sculpture chamber; a testimony to the vision of Pompidou, the philosophy and creativity of Agam, and the commission, politics, installation, and reinstallation of the Salon that took place over a thirty-two year period from 1968 to 2000. Most recently, Agam completed work on a sculpture gracing the entrance to a new stadium built in Kaohsiung, Taiwan for The World Games 2009.
CONTEST RULES: