Exhibit: Renoir in the 20th Century

Pierre-Auguste Renoir is easily the most popular painter of the Impressionist movement. The colorful landscapes of his early years and the idealized nudes of his later years are equal in their appeal and their luminous, spontaneous qualities. The Park West Gallery masterworks collection is one of the world’s finest, showcasing artwork by artists including Renoir. View the Park West collection >> 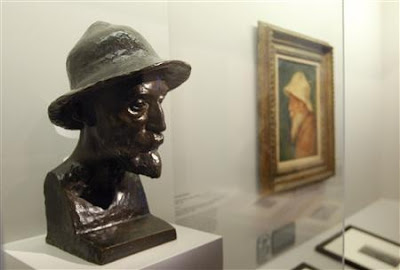 PARIS, FRANCE — Renoir in the 20th Century, showing at the Grand Palais, includes some paintings, drawings and sculptures that are little known to the public. The exhibit in Paris showcases artwork from the second half of Auguste Renoir's career, when he changed course in his 40s to experiment with a more classical style.

In the 1880s, Renoir moved from the Impressionist school, best-known for sunlight-filled landscapes painted outdoors, to concentrate on female nudes and portraits. Renoir never wanted to reject Impressionism, but instead strove for a more decorative and traditional style.

His three sons, wife and family friends figure among the figures painted. Among the works is a bust of his son, from a private collection, being publicly displayed for the first time. The exhibit also includes works by other artists from the beginning of the 20th century, such as Picasso, Matisse, Maillol and Bonnard, to show Renoir's influence on painters who followed the Impressionists. One room contains photos of Renoir throughout his life, in his Paris apartment and in the countryside, with his family and friends.

Renoir in the 20th Century is currently on view until January 4, 2010.

More information on the exhibit/purchase tickets >>