Forty artists from around the globe - including Itzchak Tarkay, Peter Max, Yaacov Agam, Csaba Markus, Emile Bellet, Anatole Krasnyansky and Marko Mavrovich - were flown in and provided with complementary accommodations for the special event along with thirty of Park West's most distinguished VIP couples who also attended the festivities.

"I was taken away by the entire experience of the conference. The opportunity to meet and talk to so many of the artists that Park West represents was truly an experience of a lifetime. I now have a much more intimate feeling of Park West, how it operates and the amazing people involved in making the company what it is today," said associate auctioneer, Hooman Shad.

Attendees were treated to an opening ceremony and fine dining at the prestigious Ritz Carlton in Dearborn, Michigan. At the historic Henry Ford Museum everyone enjoyed full access to the museum's displays of impressive innovations and inventions. Guests were exulted by the entertainment at Detroit's luxurious MGM Grand Casino and Ignite Lounge. And finally, the ultimate culinary feast was had by all during the farewell party at the Roostertail, often host to celebrities including Tony Bennett, Eric Clapton, the Rolling Stones and Aretha Franklin. 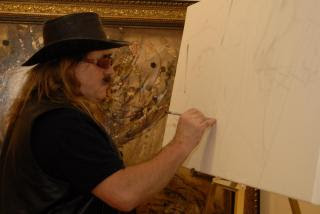 In addition to first-class auctions offering some of the best artwork in the Park West collection, auctioneers, trainees and VIPs had the opportunity to mingle and engage in discussions with the artists. Some of the artists, like Csaba Markus, were so inspired by the ambient creative energy that they set up mini-studios throughout Park West Gallery exhibition spaces. Onlookers enjoyed a rare glimpse into the creative process as they watched their favorite artists paint live before their eyes.

VIP guests, Tom and Judy of Corona California, complimented "The VIP event was awesome! The whole Park West staff went above and beyond to make it truly memorable. The friends we made and memories we shared will last for a long time."
Posted by ParkWestGal at 11:08 AM