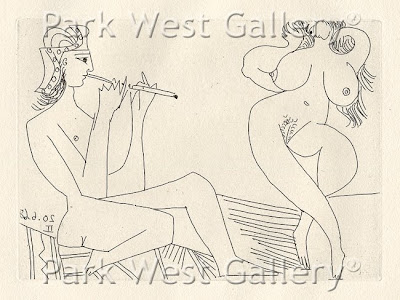 The 347 Series is a compilation of 347 etchings, engraving and drypoints and represents one of the last great collections of Picasso graphic works. The entire series was created in only seven months (from March 16 - October 5, 1968) and was part of Picasso's historic battle against the wave of conceptual and theoretical "art" that was the rage in avant-garde circles in the late 1960’s.

Sixty-six of the 347 images were created for a small folio called Tales of Celestine, which explored Picasso’s fascination with the character of Celestina from the Tragicomedia de Calisto y Melibea (Book of Calisto and Melibea and the Old Whore Celestina), a novel published in 1499 by Fernando de Rojas.

Suite Vollard is 100 etchings created by Picasso between 1930 and 1937 and was one of Ambroise Vollard's most impressive undertakings. Ambroise Vollard, while relatively unknown in his day, has come to be recognized as one of the greatest art dealers and publishers of the 20th century. Over the years, history has vindicated Vollard's artistic instinct and his championship of once controversial painters, including Cézanne, Renoir, Gauguin, Van Gogh, Rousseau, Rouault, and Picasso.

Picasso once asked, “Who sees the human face correctly: the photographer, the mirror, or the painter?” What do you think and why? Share your ideas here!