MIDDLEBURY, VERMONT - The Middlebury College Museum of Art presents Making Sense of Thomas Kinkade, an exhibition about the enormously successful but controversial contemporary landscape painter. The exhibit is currently on view through August 9, 2009. 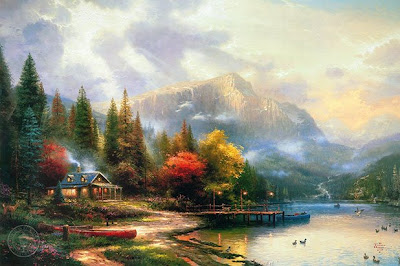 It is easy to dismiss the work of Thomas Kinkade as kitsch and brush aside his popular success as only a marketing phenomenon, but to do so ignores his sincere zeal and the deep resonance his pictures have with huge numbers of people. While an appreciative audience of millions is not a sure sign of aesthetic quality or profundity, the wide appeal of Kinkade's art indicates that he has tapped into powerful personal and cultural longings. In other words, whether his work is good or not, it is telling.

The exhibit considers works by Kinkade along side paintings by Thomas Hill (1829-1908) and Norman Rockwell (1894-1978), two artists he greatly admires, as well as America's Most Wanted, a 1993 landscape print by Vitaly Komar (born 1934) and Alex Melamid (born 1945), that aims to distill into a single work the artistic preferences of a random sample of American adults.

Kinkade's images are consistent with popular preferences in art, but what's more his work is deliberately based on a relevant, respectable artistic heritage. He has reshaped and updated the tradition of Romantic landscape painting in particular and consistent ways to create his nostalgic, sentimental confections. Consistently running through the art that has most influenced Kinkade is a search for relief from the pressures and shortcomings of modern life.

Kinkade's own work may be popular because it is uplifting and painless, but it is not without content. His fantasy alternative existence consists of a tranquil domestic setting in a timeless but nonindustrial world free of social and psychological tensions. His images offer daydream relief from real, serious social and cultural stresses. This redress, however, occurs mostly in wistful imagination rather than in action, and thus Kinkade's pictures help viewers to adapt to a life out of balance with their ideals instead of working toward reconciling conflicting desires in practice.

Kinkade's trademarked tagline is "The Painter of Light" and indeed light is a crucial element of his images. His luminous skies are a standard Romantic convention for suggesting a divine presence permeating nature. Unique to Kinkade's work, as in his painting Hometown Morning, is a bright warm golden light blazing out improbably from every single window of his cozy dwellings.

Some pictures show paradise already obtained, or nearly so, which encourages viewers to use them as sedatives, not spurs to soul searching. Kinkade, however, hopes for more. He consciously offers his works as a remedy for psychological and more broadly cultural malaise. Other pictures are invitations to wander, but in their picturesque sweetness and lack of incident and turmoil they assure a safe and happy trip. In this way, Kinkade pictures are like bourgeois vacations: an adventure of sorts, but not dangerous, complete with comforts, replicating one's daily existence at home without its cares and shortcomings but with more novelty and whimsy. [Source: http://www.tfaoi.com/aa/9aa/9aa67.htm]
________________________________________________________

What are your thoughts about the artwork of "The Painter of Light," Thomas Kinkade? Share your comments here!