"Try to put well in practice what you already know; and in so doing, you will in good time, discover the hidden things which you now inquire about."
Rembrandt Harmenszoon van Rijn (July 15, 1606 – October 4, 1669) 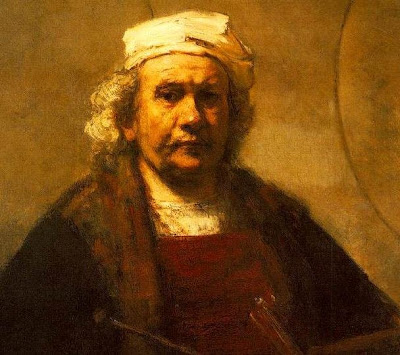 Rembrandt Van Rijn: A Life Etched in Copper
Who was Rembrandt? Most art lovers would answer that he was a painter. A Baroque Master. An emotive genius whose works come to life through a dramatic interplay of shadow and light.

But a printmaker? Fewer people realize that Rembrandt Harmenszoon van Rijn revolutionized the medium. He painted portraits to make a living; he created etchings to test his boundaries.

Rembrandt produced his first etchings by the age of 20 and created more than 300 images during his lifetime—often revisiting the same etching time and again to perfect its execution. His work influenced some of the most renowned print makers in history—including Goya, Whistler, Chagall and Picasso—yet none, save perhaps Picasso, managed to eclipse his virtuosity in the medium.
Popular Success and Personal Tragedy
The ninth of ten children born to Harmen Gerritzsoon van Rijn, a prosperous miller, and Neeltgen Willemsdochter van Zuytbrouck, the daughter of a baker, Rembrandt was born in Leiden, Holland—then considered to be one of the principal artistic and intellectual centers in Holland.

At the age of 13 he enrolled in Leiden University, but soon left to pursue art, first as an apprentice to a history painter in Leiden and later under the tutelage of Pieter Lastman, a famous artist in Amsterdam. Returning to Leiden, Rembrandt opened a studio—while still in his teens—with his friend, Jan Lievens, who had also studied under Lastman.

By the end of 1631, Rembrandt returned to Amsterdam, having accepted a commission from a well-known physician in the city. He lived with Hendrik van Uylenburg, a successful art dealer, whose cousin he married in 1634. Rembrandt’s marriage to Saskia van Uylenburg was a boon to his career, providing him access to wealthy patrons who eagerly commissioned his portraits.

As his career flourished, Rembrandt’s private life was beset by tragedies. Of the couple’s four children, three died before reaching the age of three months. The artist suffered more heartbreak when Saskia died shortly after the birth of their son, Titus, who lived to adulthood—but would pre-decease his father.

After Saskia’s death, Rembrandt hired Geertje Direx to care for his young son. When the relationship soured—leading to a legal battle—he turned to Hendrickje Stoffels, who eventually became his common-law wife. While the couple’s first child died as an infant, their daughter, Cornelia, survived.

Rembrandt had a penchant for an ostentatious lifestyle and was plagued with an obsessive desire to accumulate art and other possessions. After years of living beyond his means, he was forced to declare bankruptcy in 1656. Over the next two years, his home and many of his possessions were auctioned to pay his creditors.

Do you have a favorite work of art or quote by Rembrandt? Share it here!